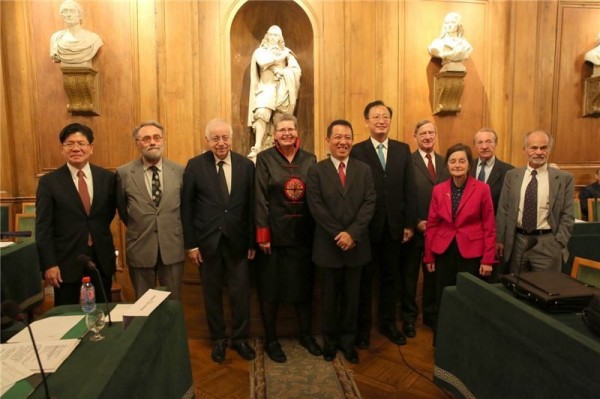 Established by the Ministry of Culture and the Institute of France's Academy of Moral and Political Science and Politics in 1996, the Taiwan-France Cultural Awards advances cultural exchanges among Taiwan, France, and other European countries. Two prizes - one individual, one group - are bestowed annually to recognize outstanding achievements in the academic and cultural promotion of Taiwan.

For the 21st edition, the awards went to Patrice Martinet, Artistic Director of Athenee Louis-Jouvet Theatre, and the Vienna Center for Taiwan Studies, with each receiving a cash prize of €25,000.

Martinet, who is also the founder of the Paris Summer Quarter Festival, began collaborating with the Council for Cultural Affairs, predecessor of the Ministry of Culture, in 1994 by inviting Contemporary Legend Theatre to perform in Paris.

Martinet then invited Cloud Gate Dance Theatre in 1994, Ju Percussion Group in 1998, and Shintrun Taiwanese Opera as well asLiao Chiung-chih Taiwanese Opera Troupe in 2000 to perform in Paris. Their performances were also aired and made into documentaries by Arte TV network.

Established in 2009, the Vienna Center for Taiwan Studies is affiliated with the Department of East Asian Studies of the University of Vienna. With Astrid Lipinsky serving as the current director, the department added Taiwan studies to its curriculum in 2008, and opened a new course titled "Cross-sectional Study of Taiwan” for the 2015-2016 school year.

Deputy Minister Yang used the concept of "tranquil power” coined by the late philosopher Tzvetan Todorov to praise Martinet and the Vienna Center for Taiwan Studies for their spirit of humanitarianism and the power of tranquility. Yang noted that the 21-year-long history of the Taiwan-France Cultural Awards also demonstrates the tenacity of such power.

Jean-Robert Pitte, secretary-general of Institute of France's Academy of Moral and Political Science and Politics, praised Taiwan for its gradual development into a true democratic country and its strong economy that plays an important role in the world.

However, he noted that Europeans still lack the channels to learn more about the rich and diverse culture and arts of Taiwan. Pitte expressed his hopes for the Taiwan-France Cultural Award to encourage more Taiwan-France exchanges, as it shares the spirit held by the Institute of France.

Martinet noted that Taiwan's diverse arts have one thing in common - that is everything is made perfectly without one extra movement or musical note. He promised to dedicate all his heart to holding more Taiwan cultural festivals in France and increasing the exposure of Taiwan's cultural assets and contemporary arts on the international stage.

Lipinsky, who accepted the award on behalf of the Vienna Center for Taiwan Studies, noted that the center has collaborated closely with Taiwanese agencies such as the Ministry of Education, the Ministry of Foreign Affairs, Chiang Ching-kuo Foundation for International Scholarly Exchange, and Taiwan Foundation for Democracy. She hopes the award will bring more support and recognition for the center and create more collaboration opportunities.

The ceremony was attended by roughly 100 guests, including Representative Zhang Ming-zhong (張銘忠) of Representative Office of Taipei in France, Deputy Minister Wu Chih-chung (吳志中) of Foreign Affairs, and President Tsutomu Sugiura of the Japanese Culture House of Paris.

The laureates of the 2017 Taiwan-France Cultural Awards were also announced in October. Instead of awarding two individuals or organizations like the past editions, the 22nd edition has selected four individual winners - filmmaker Jean Robert Thomann, ethnologist Veronique Arnaud, designer Christian Rizzo, and scholar Stephane Corcuff. Their awards ceremony will be held next fall.